About the Piano Teacher 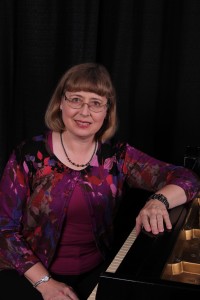 Born and raised in Southern California, Aliso Viejo pianist Laurie Meinhold earned a Bachelor of Music in piano performance with honors from California State University, Fullerton. She also holds a Master of Arts degree in Music from Claremont Graduate University.

As a young child she listened to the Classics, Popular, and Broadway music since her parents were both music lovers. She began her piano lessons at the age of seven, picking out tunes by ear the moment the piano entered the house. “My mother sang to me and played recordings of Beethoven,Mozart, and all the greats. My favorite pieces when I was five were  Grofe’s Grand Canyon Suite and Rossini’s William Tell Overture.”

She has taught piano in Aliso Viejo since 1998, and has performed as a classical pianist, school accompanist and church musician. In addition she has served as a judge for the Music Teacher’s Association of California, California Association of Professional Music Teachers (MTNA affiliate) and the National Guild of Piano Teachers.

“I began teaching as a teenager when neighbors would knock on the door asking for lessons because they heard me practicing the piano as they walked down the street. Sharing what I love became my career.”

Laurie Meinhold is an MTNA nationally certified Piano teacher. She is past president of the Orange Coast Cities branch of the Music Teacher’s Association of California and served on the board of directors for 10 years.. She has also studied the Alexander technique which focuses on technique, learning to play with ease. Her students have won many awards, and several have gone on to careers in music.

This message is only visible to admins.